A recently discovered sub-type of the Desert Ballator, Steppes are versatile creatures with their own unique behaviors and herd dynamics. Steppe Ballators are found primarily throughout Central Asia in the Great Steppes, but small populations have been recorded in South Asia and Eastern Europe. Geneticists believe Steppes originated from Desert Ballators that migrated out of the Middle East over a thousand years ago and became genetically isolated. Though mentions of them are recorded in the accounts of travelers on the Silk Road information on them was lost for centuries. Since their rediscovery EquusBallatorSociety has been working with Ballator breeders and enthusiasts in Asia to sustain and study this fascinating type. 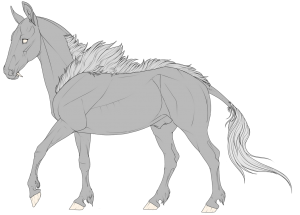 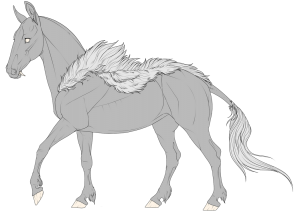 Males and females of the species are similar in stature and well-suited for dryer climates and drastic temperature changes year-round. They are shorter than their Desert cousins and stockier, built for traveling great distances and varied terrains rather than sprinting. Their manes are plentiful and grow as a thick cover from their shoulders to their rump to keep them warm during the colder months. In the summer these manes remain, but much of the hair is shed which gives them the fine, coarse feeling that Desert ballators have. They do not have horse-like manes and their tails end in a thick, expressive tuft. 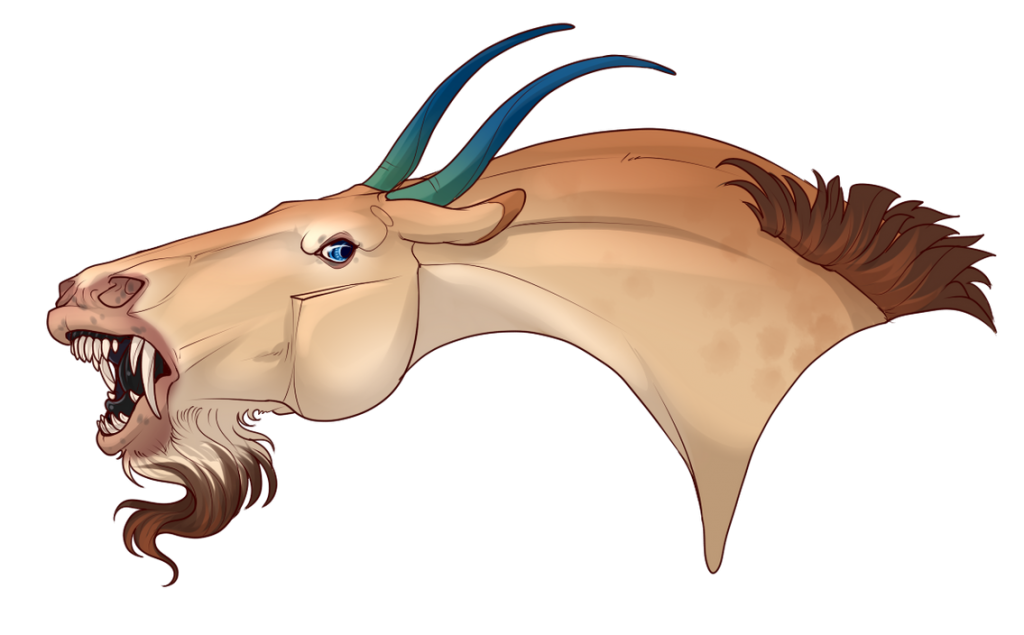 Female Steppes have a longer manes on their backs while males have vestigial remnants of a Desert neckmane. Both males and females can sport beards, but these are not seen on all specimens. Like Deserts they have two sets of canines, one significantly longer than the other, but have omnivorous dentition. Their sclera and pupils are white, but they uniquely have black gums and dark flesh in their mouths. Steppes will flare their lips and flash their fangs as a warning sign before a fight, and the striking appearance of yellowed fangs against black gums certainly relays their meaning.

Both their horns and manes are fully grown by the time they are 6 years of age.

The height of Steppe Ballator ranges from 14-16 hh.

Herd: Steppes tends to live in small herds, but solitary specimens are not uncommon. As a herd they do not follow strict rank dynamics or attend to the lead of one horse, but instead follow their prey’s movements. Fighting within herds is rare as Steppes tend to rely on one another for survival and protection, but they are fiercely suspicious towards any outsider. Any who approach and risk the safety of the group tend to wind up as food. In captivity Steppes far much better when grouped with their own type, but can live with other types if they are raised around them.

Feeding: Steppes are technically omnivorous, but are predominantly hunters. Their lives are centered on traveling in small groups and following herds of herbivores that they prey upon. Though they eat some of the same vegetation their prey do, the majority of their diet is meat. They are not picky eaters and will scavenge when necessary.

Defense: Steppes usually rely on the presence of their group to warn away enemies, but in one-on-one fights it is in their nature to attack. They are hardy and protected by their thicker manes. They do not have extensive warning signals beyond flashing their fangs and will go in with their horns if their opponent does not back off quickly. That being said, fights between Steppes are rare.

Breeding: A mare will initiate mating rites during the breeding season by approaching the male she is interested in and performing elaborate displays with her extensive manes. Should multiple mares be interested in one stallion often the mare who has more successes and experience as a hunter wins the stallion’s affection. Still, fights can happen and sometimes they are encouraged to determine the strength of the combatants. Foals are taken care of by the herd once they are weaned, and every Steppe takes a role in teaching younger horses how to hunt. 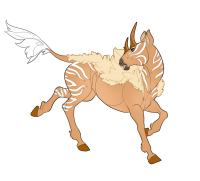 Steppe Ballators, being the Sub-type of the Desert Ballator, may be bred together; the result is usually a healthy but sterile foal.