Mountain Ballators have been used for centuries as loyal mounts, and they are arguably the most loyal and good-tempered type when treated correctly. 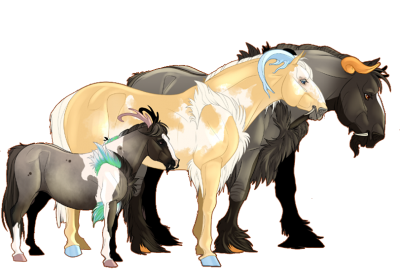 Mountain Ballators are the most widely-dispersed and common Ballator Type. They inhabit the Americas, Europe, and Australia, and while they have no sub-type, they come in any size or shape, most commonly Light, Draft, or Miniature pony.

Like many other Types, they are omnivorous. There are two distinct types of Mountain Ballators; the Equine-Toothed and the Carnivore-Toothed; those with normal equine incisors are primarily vegetarian due to living in lush areas. Carnivore-toothed Mountains usually life in Deserts or snowy areas where plant life is hard to come by. 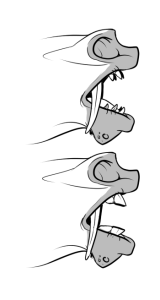 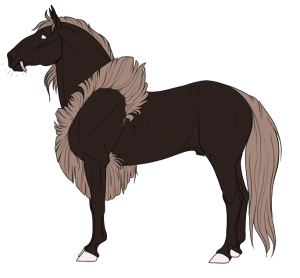 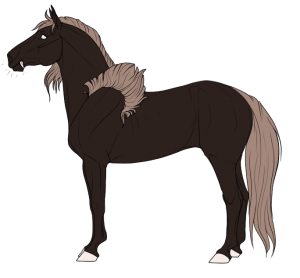 Stallions are very much more muscular and robust than mares, with longer canines and a roman nose. Mares tend to be lighter built, with straight or dished faces. Shoulder manes of either sex are extremely stiff and grow along the scapula, with stallions’ chest manes going past the point of the shoulder, connecting where the neck meets the chest, and covering between the front legs and up to the elbows. Mares have been known to have elbow manes, but this trait has mostly been eradicated. Stallions will begin growing beards at the age of 3 to 4, and chest manes are full at the age of 5. Mares do not grow beards or chest manes.

Mountains’ adult horns and manes will be finished growing at 7 years of age, at which they are considered adults. 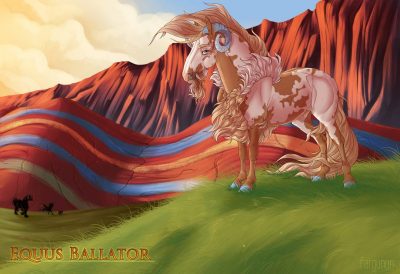 Herd: While Mountain Ballator mares are known to be rather gentle, the stallions can be very aggressive. In the wild herd, a stallion protects and defends anywhere from 3 to 10 mares and foals. When young males sprout beards, the stallion will chase them away, as it is a sign of sexual maturity. Stallions will commonly fight to the death over herds, unlike the modern equine. Like the modern equine, however, each herd member is part of a strict hierarchy. No horse is equal, merely higher or lower than another. Some mountain mares have been seen to sneak away and breed with another stallion before returning to her own herd.

Feeding: Canines as well as horns are used to dig up roots and for foraging. Mountain Ballators love to eat roots, berries, tender grasses and wild herbs as well as meat. Usually they go for larger game, as smaller game is hard to catch due to having to run with one’s head down. Hunting is usually done alone or with one companion, and Ballators will use a combination of stalking and chasing to catch prey. Some Ballators even pretend to be harmless grazers until they are in striking distance. Once prey is caught, canine teeth are used to puncture the throat. Some Ballators may let the prey go at this point and let it bleed out; others hang on and thrash until the prey dies.

Defense: When a Mountain Ballator is angered, frightened, or surprised, it’s shoulder and/or chest manes will stiffen dramatically and puff out, giving the horse a larger appearance. The Ballator may then do what is known as ‘rattling,’ in which they twitch the manes rapidly to produce a thrumming sound in short bursts. When stallions fight, it is common for this to occur, as well as blood rushing into the nostrils, making them red on the inside in an attempt to scare off the attacker. They will bear teeth and clack them loudly, signaling readiness to bite. 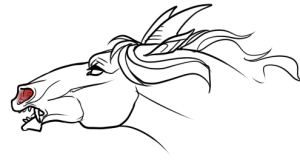 Breeding: While these creatures can be very aggressive, to potential mates they are very soft. A mare must initiate contact, which is why so often modern, domestic coverings do not occur in Ballator breeders’ worlds. The mare will present herself to the stallion, and the two will show each other their teeth, clacking loudly. During this, the male will often prance, puff his manes, and rattle them as well as presenting his horns. If the female is impressed, she will bite the stallion, and the two will play a game of tag. If the stallion catches the mare, she will allow herself to be bred. Mares are pregnant for 11 months, at which time they give birth to a foal. Horns are small nubs at birth.

The Mountain Ballator can be safely crossbred with the Forest Ballator. Results are always a healthy foal  and male foals, when grown, may have a combination of Mountain/Forest manes. 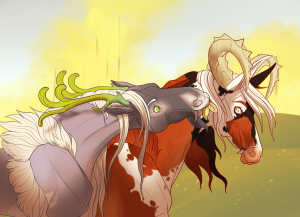