Once thought to be a relatively new strain of Ballator, the African Ballator is now known to be one of the oldest types of Ballators, with the help of Native African folklore combined with stories and sightings from ancient times. The African Ballator has been around longer than previously realized, and is native to all parts of Africa except the extreme deserts. They prefer the jungles and Serengeti, staying away from humans whenever possible, and as a result they have only recently been in human possession. It is suspected that roughly 700 years ago, this small, hardy type suffered a dramatic decline in population due to drought or some other means and has slowly been on the incline since. 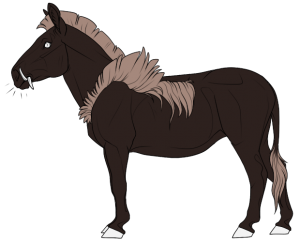 Similar in build to a Zebra or a Przewalski’s horse, the African is short, staut, and has a low center of gravity, making it the ideal trail, pack, or hunting horse. They are not recommended as children’s horses or to be used for activities such as racing or jumping due to short limbs and heavy bodies. Some african Ballators have large rounded zebra-like ears; others may just have larger horse-shaped ears. The tail of the African is very zebra-like, long with a tassel at the end.

All African Ballators possess a series of stripes that can cover the head, neck, shoulders or hindquarters. These stripes tend to stay away from the belly region and cannot cover the whole body at once as a Zebra’s might. However, the stripes can be any thickness, can fade, or pattern but are usually uniform on a particular horse. They act as fingerprints, each horse having a unique set that allows other Africans to identify them. These stripes may also change the mane color when they touch mane.

Much like Plains Ballators, Africans have two sets of long canines accompanied by carnivorous incisors and molars. The long teeth are thick and sturdy, and are merely thickened and lengthened versions of the canine tooth, so one set grows from the top and one from the bottom jaw.

The manes of the African are similar to the Plains, where the shoulder mane extends to the mid-rib cage region. This extra padding can grow to about halfway down the side of the horse and protects it from bites and kicks, as well as from insects. Mare’s shoulder manes grow close to the chest but do not connect like the stallions’. Some African Ballators also sport a rump mane. 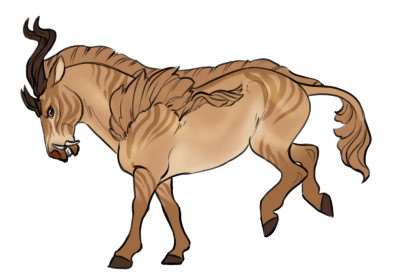 African Ballators do not sport any type of paint or white marking except minimal white. They can, however, be Albino, and can sport Clownfish markings.

Africans’ adult horns and manes will be finished growing at 7 years of age, at which they are considered adults.

The height of the African ranges from 13-15hh.

Herd: Africans roam in small herds guided by a herd matriarch. Stallions roam either by themselves, or when a mare accepts one into a herd, they become the protector. African Ballators are extremely vicious, especially with the arrival of foals. African foals will follow anything that moves within the first month or so of life until they become closely acquainted with their mother, and this has been used as a trick to lure young Africans away from their dams by predators and humans alike. Because of this, dams will guard their foals with their lives and are extremely protective. The call of an African is similar to a Zebra’s mixed with the characteristic roaring bellow of a Ballator.

Feeding: A mainly carnivorous strain of Ballator, the African will prey on gazelles, small game, and sometime larger animals like wildebeest. They will also eat berries and plants when they must. A very cunning and perceptive Ballator, the African is very skilled at stalking, ambushing, and tracking prey. They have been known to attack and run off larger predators such as lions and leopards, but do not face less of a threat from them because of it.

Defense: The primary response to a threat from the African is fight. Rarely will they run away, especially if a foal is in danger. Using horns, hooves, and a powerful bite, they rip and stab opponents until one cannot continue. The herd stallion will often fight the threat while the herd watches, and if he should fail and the predator still pursue, the herd will run.

Africans can stiffen their manes and rattle them, as all types can, and will puff them up often to make themselves bigger. Bearing and clacking teeth is also a common indicator of an attack, as well as pawing the ground and snorting.

Breeding: A violent spectacle, courting rarely goes smoothly, especially when a stallion is new to a herd or mare. Mares will fight hard until the stallion either stops pursuing or makes a point that he will not halt his quest. Often, a stallion will not be able to breed with the proud herd matriarch unless he has proven himself to her by displays of power or hunting, and often will bring food offerings to win her over.

African Ballators do not sport any type of paint or white marking except minimal white. They can, however, be Albino, and can sport Clownfish markings.

African Ballators will always CARRY Poecilia and Veneum but can express Zebroid. They cannot express Wyrm.

Africans, when bred with any other type, will always produce a dead foal. The cause of this is unknown.