Within the ever expanding canon and lore of Equus Ballator, there are many important locations that may be referred to off and on.

Some locations have many names, some only have one, and some locations are not yet reachable to Ballator-kind. This page may contain spoilers for certain quests and storylines. Please proceed with caution when reading. Locations within the lore are also always changing and updating; new places may appear and places may fall to the annals of time and legend only. The admin team advises caution when depicting locations that have not been fully introduced to the various mechanics of the game. 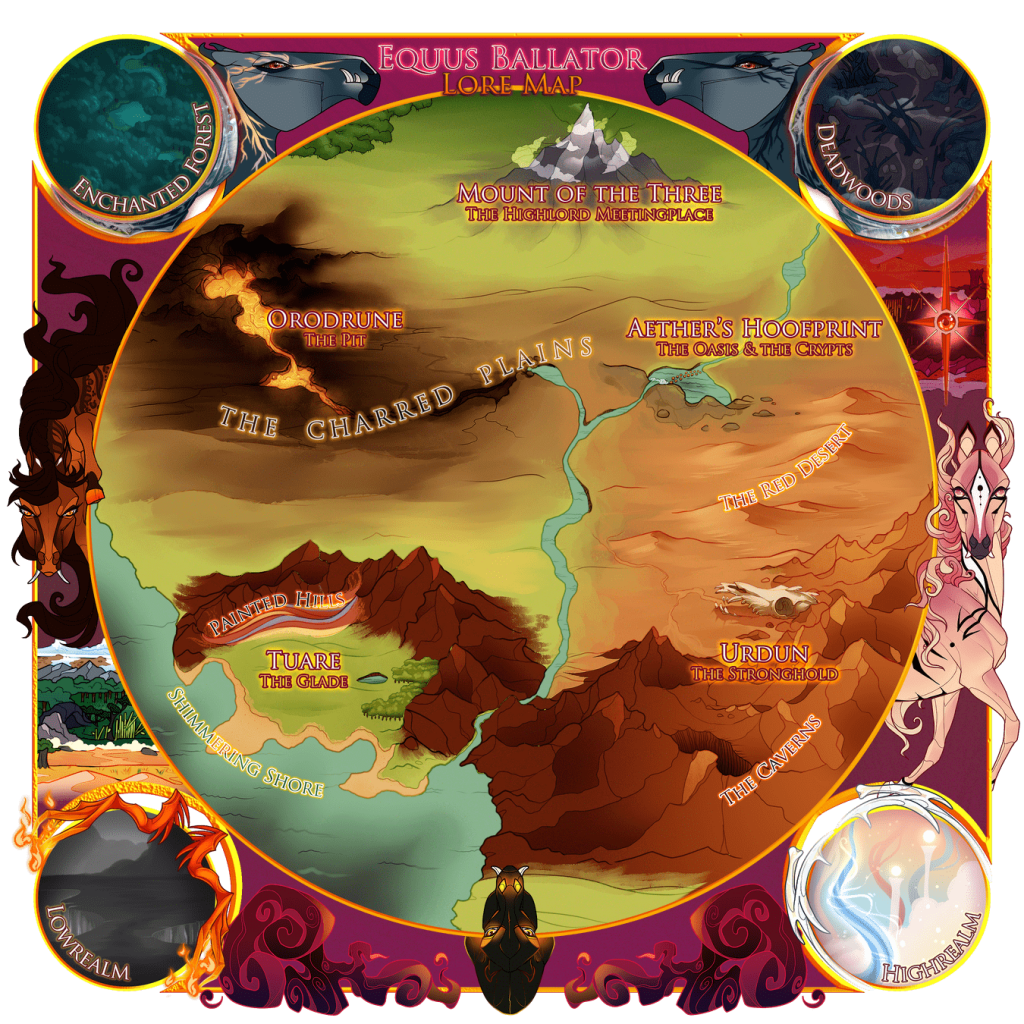 Water flows through The Forest, it’s beginning and end unknown, though the rivers and lakes seem to be quite deep. There are also rumors of a Golden Temple deep within, inaccessible to most Ballators unless they wander upon it by accident. It is unknown who or what this temple was once for.

Hunting within The Enchanted Forest is only open via specific quests and events. Highlordess Ares will often entertain hunts within it during Illumination, and Puck may also occasionally welcome Ballators within the wooded depths. Other than these exceptions, The Forest wanders too much and it is impossible for most Ballators to find it unless it wants to be found.

A wandering manifestation of the damage, death, and destruction caused during The Realmwars, The Deadwoods answer only to Lowlord Hannibal and are often called upon when the lord feels that the world needs some confusion thrown its way.

The Deadwoods are an inverse of The Enchanted Forest, mocking it’s vibrancy and life with it’s death and decay. Rumors say that anything that dies on The Charred Plains stands a chance to be reborn in The Deadwoods, though it won’t be the same as it once was.

Unique Hunts can be found within The Deadwoods, the ghostly creatures unlike any other that roam the mortal world. Due to Hannibal’s jealousy, The Deadwoods stay locked unless he entertains hunts during The Month of Shadows or unless he or Owl give a specific quest.

The Deadwoods have not been explored enough to know if there is a location or unique area within it. Any Ballator that roams within The Deadwoods for an extended period of time tends to go mad before any significant discoveries can be made.

The Mount of the Three

Located high in the mountains just north of The Charred Plains is the aptly named Mount of the Three. A well worn and often used path, known as Triskelion Pass, is carved into its side and is just wide enough for two Ballators to walk side by side or pass each other easily on their way up and down the cliffs.

Located almost at the peak of The Mount is the intricately carved cave entrance to The Temple of the Three. The Temple is a place where the remaining Lords can most easily interact with their devotees. Most commonly referred to by Ballators as The Highlord Meeting Place, The Temple is one of the most commonly visited locations within the Ballator world.

Hannibal’s Hell on Earth; The Pit is sunken into the ground, guarded by a moat of lava and sheer cliffs that jut up like the talons of a mighty beast.

Hannibal’s throne is in the center of this devastation. The Lowlord, free from the confines of The Lowrealm, surrounds himself with ghouls and chaos in the place where he was defeated by Ares and Aether during The Realmwars.

Currently, Orodrune is untouchable by Ballators who have not completed Hannibal’s Quests. All who try to enter Orodrune without the Lowlord’s final blessing will be burned alive and turned into ghouls to guard his homeset.

The Charred Plains were once a beautiful and verdant land, formerly known as The Golden Plains. More than even a rolling plains, they were once home to trees and animals and multiple rivers and lakes. During The Realmwars, the Gods destroyed the land, who’s name has been lost to time. Once glorious and beautiful, The Plains are now a mockery.

Scarred and ugly, there is no longer sustainable plantlife within The Charred Plains. The hooves of The Gods tore deep into the land as they battled and the land is now dead and torn apart. Rivers and lakes have become deep crevices and canyons and are littered with the bones of Ballators and other animals that have been trapped falling into them. Occasionally, one might stumble upon a boiling pit of lava or an unstable and toxic geyser.

Jutting cliffs surround the majority of The Plains and are home to several Herds that continue the battle started by their Gods. The hard ground is coated by ash– a constant source of which is Orodrune, The Pit. Ballators who call The Plains their homes are hardy and, often times, as unforgiving as the land around them.

Aether’s Hoofprint is an oasis, of sorts, set within The Charred Plains. It offers the illusion of safety to Ballators and other animals that might find themselves roaming The Plains’ harsh and unforgiving environment.

The waters in Aether’s Hoofprint are toxic and may cause Ballators to become Startouched, which can be fatal. Crumbling statues litter The Hoofprint, most of them reminiscent of Highlords from long ago. A waterfall at it’s center covers an entrance to mysterious crypts.

The Oasis is a set of neutral ground for most Ballators and is home to a cult of Tyndariai known as The Acolytes. The Acolytes are joined in their residence here by two Troubadours, Antares and Betelgeuse.

The Red Desert has not changed much over time. It functions much like a desert within the mortal realms, with hot and arid days and nights that drop below freezing. The Desert marks the territory lines between Tyndariai’s Acolytes and Ares’ Hunters. The former usually avoids The Desert while the latter may hunt ghouls there in Ares’ honor to prove to their worthiness to the Highlordess.

More ghouls than Ballators, both normal and corrupted, call The Red Desert home since The Realmwars. Rumors surround this large stretch of land that there is a Great Ghoul within it’s dunes, larger and formiddable than all the others.

There are unique hunts within The Red Desert, the strange creatures here being hardier than anything else in the mortal world. Some of the animals here may even be tamed with the right items.

Recently, both Desert and Steppe Ballators have started traversing and exploring this land more and more, hoping to find significant locations or a place they may call their homeset.

Tuare, also known as The Garden or Regale’s Glade is where the first Ballator’s hooves touched upon the earth after Aether’s Creation.

Nestled in a mountain valley just far enough from Orodrune to be safely hidden, Tuare is home to its own unique animals and ecosystem. There are unique hunts within The Glade, the timeless creatures here calling back to some similar and forgotten creatures in the now mortal realms.

No Ballators live in Tuare save for Regale, Star, and their twin foals. The closest Ballators may live to The Glade is within the peaks and valleys of The Painted Hills that surround The Glade itself.

Tuare is, currently, only accessible briefly through Regale’s Quests or permanently for those who have climbed the mountains to the Temple of the Three to begin Aether’s Quests.

The labyrinthine stronghold of Urdun is built into the jutting cliffs that cradle the southern part The Plains. The mountains themselves have no names, the only major landmark among their peaks being the large skull known as Dragon’s Maw.

The mountains are too jagged and sandblasted to comfortably reside on their sides, and life has a hard time starting in their valleys. The best way to live among this region is for a Ballator to make their way past Dragon’s Maw and into The Caverns.

The Highrealm is best described as beautiful. A rolling and swirling cacophony of colors and lights; stars bursting into brilliant existence and dying in dazzling glory.

The Highrealm is the Land of the Highlords; a sort of Heaven for Ballatorkind. Seemingly formless space, it is alive with color. Nebulas spiral upwards to form pillars that hold aloft a canopy of galaxies and cosmic dust. The “ground,” as the Highlords know it, is hidden by swirling mists that float just above its surface.

Everywhere is bursting with color; it comes from all directions- shimmering and resplendent. The Highrealm is a reflection of the joy of life itself.

At this time, there is no way for a Ballator to enter The Highrealm without dying or unless a Highlord grants them passage via special event. There are no known specific locations within The Highrealms, due to its cosmic nature and inability to be properly explored, but it is theorized that the Highlords each have their own dedicated space within it.

In direct contrast to The Highrealm, The Lowrealm is dark and devoid of color, light, and the exuberance of life. The Lowrealm gives off almost a sense of existing in a greyscale world.

Likened to a black hole, no light enters The Lowrealm and only a few know how to escape it’s depths. Ballators sentenced to The Lowrealm experience both an icy and cloistering paranoia and a vast fear of nothingness at one time. The Lowrealm is unbearably cold; beyond even what Arctic Ballators are known to endure. This has led to the legend that Lowlord Hannibal’s skin is icy cold due to his time sentenced there and is why he now chooses a throne of fire on Earth.

The only source of light ever discernible in The Lowrealm is the internum of Lowlord Hannibal as he stalks through the nothingness. Illuminated by Hannibal, one can sometimes see the shadows of dead and broken moons floating in the blackness of the void, but there is not much else to see.

Only Hannibal calls The Lowrealm his own, though Tyndariai may sometimes reach into it to pluck the unjustly sentenced from the younger god’s clutches.

At this time, there is no way for a Ballator to enter The Lowrealm without dying or unless a Lowlord grants them passage via special event. There are no known specific locations within The Lowrealm, due to its dark nature and inability to be properly explored, but it is theorized that the Lowlord has an abandoned throne somewhere within it. 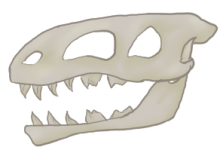