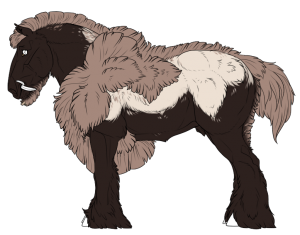 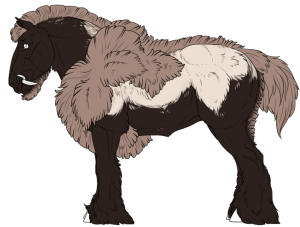 Arctic Ballators are very heavyset, with short limbs and big heads. They have large, powerful shoulders and hindquarters coupled with short backs. They resemble the modern day Ardennes or Breton breeds. Males and Females are very similar in appearance, with the only defining factor being the male’s extended chest manes and obvious genitalia; chest manes appear in both sexes, as do beards, and short manes and tails. Like the Plains Ballator, the Arctic’s shoulder mane extends to the middle of the rib cage, at which it blends into the softer, downy coat. The Arctic Plains Ballator also has a very thick top coat which covers the back, sides, shoulder and rump. This coat usually blends almost seamlessly into the shoulder, neck, back and tail hairs and usually takes on a darker shade than the base coat, has a slight tint of the actual mane’s color, or is entirely the same color as the mane.
Below is an Arctic Mane Guide for easier understanding. 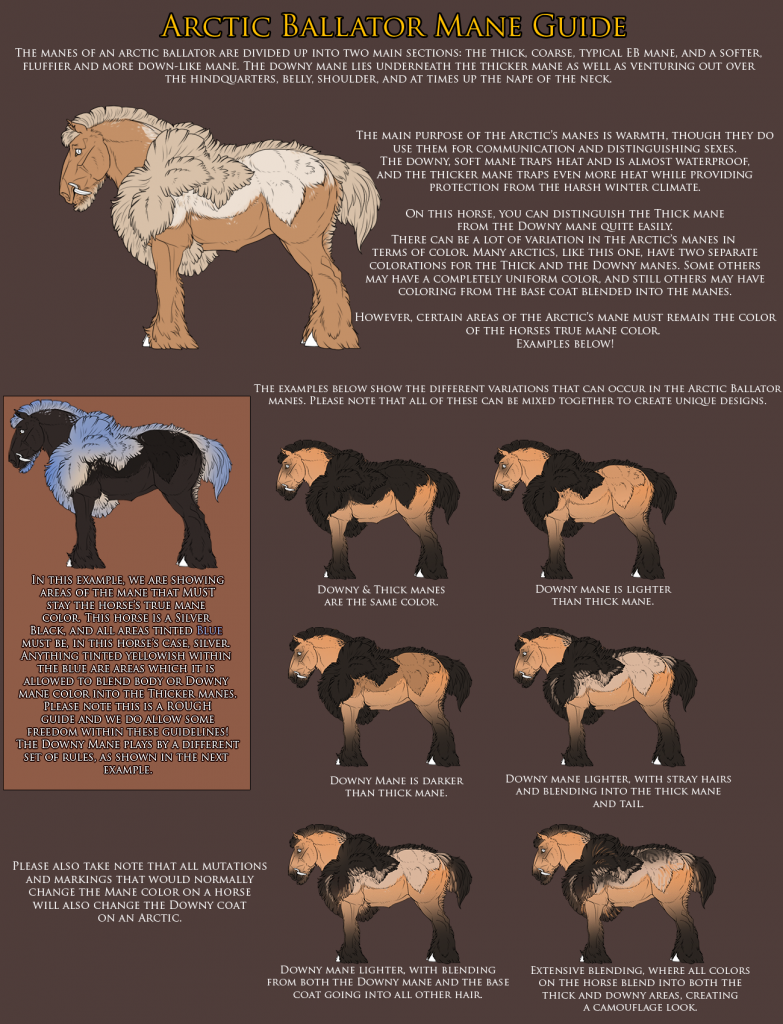 The teeth of the Arctic are carnivorous, as plant life is scarce, though Arctics will use their horns as snowplows to search for frozen plants. They have a large, thick canine and a smaller, upward-growing tusk. Like the Plains Ballator, the Arctic has a natural and flawed version of it’s teeth; you may read more about this flaw on the Plains Ballator sheet.

The Arctic’s coat is very dense and soft and almost always in a stage of winter thickness, unless springs in the arctic habitats are especially warm. The Arctic Ballator is also the only known carrier of the Arctos Mutation, which turns an Arctic’s spring coat into a white one when winter hits.

These Ballators usually have medium to large sized horns, and it is rare for them to be seen with a rare or very rare Equus Ballator mutation. These Ballators rarely have more that 4 spines on any given horn.

The Height of an Arctic Ballator ranges from 14 – 16hh. 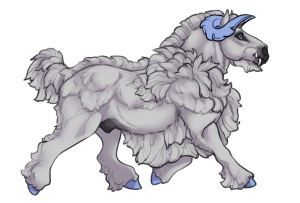 Herd: Arctic Ballators have a much more relaxed herd structure than the Plains Ballator. They do not actively kick out young males from the herd, rather choosing to live peaceful among each other.  They are hard followers of the ‘safety in numbers’ rule and herd can be rather large. However, herds have been known to split if they grow too large and the threat of starvation is looming. Herds are run by a male and his chosen female, much like Plains Ballator herds, though sometimes a lead male will only breed with his lead female, letting the other males in the herd breed freely. On extremely cold days, the herd will huddle together and rotate, much like Emperor Penguins, so that each horse gets a turn in the toasty center.

Feeding: Arctics use their horns as snowplows to barrel through drifts in search of food. They try to stay mostly vegetarian, but when meat must be eaten, they use an ambush method. They are particularly fond of roots and, strangely, tree bark.

Defense: A very non-confrontational species, Arctics will not fight unless they are doing so for their lives. To keep herds out of each other’s territories, stallions scrape horns and tusks against trees where they can find them. Other than that, they posses the same defense mechanisms as any Ballator would, with the ability to rattle it’s shoulder manes, puff them out, bleed it’s nostrils and can bite with powerful force when necessary. Foals are protected at all costs, and adults will form circles around the young when a predator is near.

Breeding: A stallion will approach his chosen mare and follow her around incessantly, often rubbing his head on her or grooming her fluffy, downy mane. If the mare pays him attention, she will return the favor and the two will groom and play for hours. During this, the male will often prance, puff his manes, raise his tail, and present his horns. If the female is impressed, she will allow herself to be bred. The male will not leave the mare’s side, even after she delivers her foal.

Purebred Arctic Ballators, with no Plains blood in thier lineages, are incapable of having the following genes/traits: 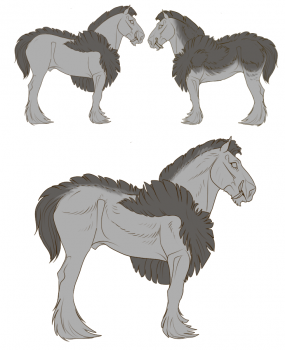 Arctic Ballators, being the Sub-type of the Plains Ballator, may be bred together; the result is usually a healthy foal which will usually take on the gender differences of the Plains, with the beard and thick coat of the Arctic. Their coats will resemble the coat of a Bakshir Curly horse. However, crosses will not inherit the full, double/downy coat of the Arctic.

When crossed, the foals of Arctic and Plains ballators will usually sport the leggyness of a Plains, combined with a certain hairyness from the arctic, as if they were in a constant winter coat state.

The will not sport the extensive mane of the arctic, nor will they have the double coat.

Thier back and neck manes may blend into the first inch or two of the coat.