European or Forest Ballators are native to, as their name suggests, the forests of Europe. They are found in densely forested zones in areas such as Luxembourg, Germany, the Netherlands, Switzerland, Belgium, and some parts of the British Isles. Small and often quite deer-like, the Forest is quiet and soft in disposition, making it one of the friendliest and calmest of the Ballator Types. They are docile and social, making perfect children’s mounts or therapy horses as well as excelling in steeplechase, Dressage, or racing, as they are very fleet-footed and agile from darting through groves of trees. 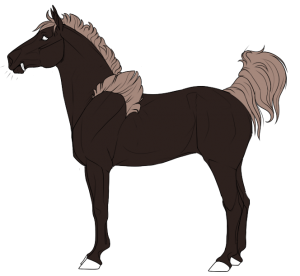 Appearing most like a modern Friesian or Cob horse, the Forest has a good sense of balance and carries its head high, holding it’s head at an angle to keep the horns out of the trees. Forest Ballators will generally have moose or deer-like horns that, remarkably, grow velvet like antlers of a deer. Forest Ballators, like deer, shed their velvet every spring, shedding the velvet just before the mating season, with freshly-sharpened tines. Both males and females also have extraordinarily long tail bones, and carry their tails vertically; they only let the tails down when sleeping or very relaxed. 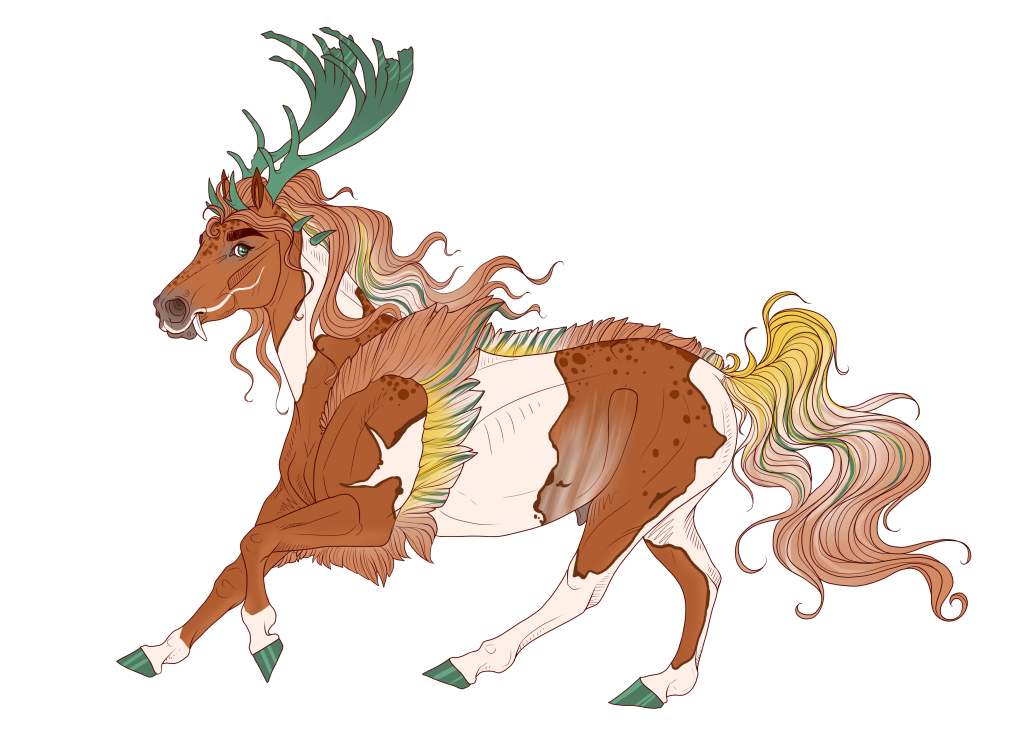 Male Forests do not have full chest manes like the Mountain Ballator. Instead, their shoulder mane continues past the elbow and ends just behind the knee before the cannon bone. The neck of the stallion can be very thick and cresty depending on the size and weight of his horns. Males can have very long manes and tails, often with tails dragging along the ground.

Another feature of the Forest Ballator is that they are natural carriers of the Dotted Sooty gene, which helps them blend into the foliage. It is very rare to find one without the DS gene.

Forest Ballators are also almost always carriers and presenters of the Agouti (A_) gene, and it is very rare for a Forest to be born black or with a black-based coat.

Forests’ adult horns and manes will be finished growing at 7 years of age, at which they are considered adults.

Herd: Mares will cluster into huge  matriarchal herds led by one female and her progeny.  Forest foals, for some unknown reason, exceptionally tiny, averaging half the size of a regular foal at birth. They are very fragile and dainty, and mares are very protective of them. Stallions will be ‘satellites’ around a herd of females or form their own bachelor herds when they leave the female herd during the first year of life.

Feeding: With small canines that barely poke out from under the lip and common Equine teeth, the Forest Ballator is not well suited to eating meat as some other types are. They prefer leaves, twigs, roots and a variety of grasses and berries, and spend almost all of their time grazing and foraging.

Defense: Being as docile as they are, Forest Ballators are much better at running from a threat than fighting it. Using their agility and ability to dodge through trees and brush, a Forest will try to evade a predator or lose it in the safety of the grove. Stallions will raise their tails and puff their manes when a rival male is present, but they will not attack each other for the pleasure of fighting as some Types are apt to do.

Breeding: Stallions battle for the right to mate among st themselves, with the herd of mares either simply watching or ignoring them. They do not fight to the death, and rarely gain any injury, as a ‘fight’ is simply the puffing of manes and rattling of horns. A mare will present herself willingly to a stallion, and then the process repeats itself. Foals are born after 9 months of gestation, and a mare will breed again the following summer.

Being closely related to the Mountain Ballator, Forests can breed with them without ill effects. 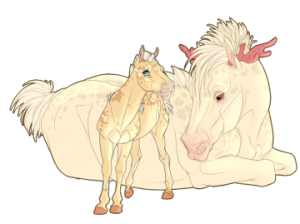