Native to cold environments such as the Tundra or high-mountain steppes, the Plains Ballator is the largest of all the types. The tallest of them has been measured just under 20 hands, which is a dangerous factor considering Plains also have the potential to be the most aggressive type. If they are not socialized with humans from an early age, they can be extremely difficult and dangerous to train. However, they can also be some of the most loyal mounts, having served Vikings in war and been used by isolated people groups in the Tundras to pull sleds as they migrate across the snowy plains. 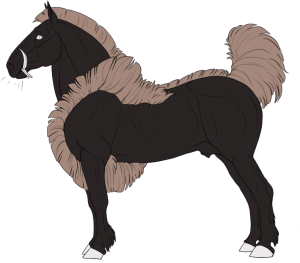 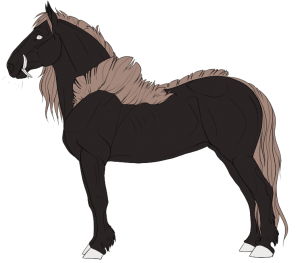 Both male and females are large and muscular, with males usually having a more cresty neck. The long canines resemble the tusks of a boar, with females having shorter tusks than the males. There are two different ways these teeth can grow, due to a flaw in certain Plains’ genetic code. On one, usually seen on Iceland or Greenland, though not limited, both sets of tusks grow from the top jaw. On the other, the canines grow with the second set growing out and up from the bottom jaw.
Shown below is the genetically flawed teeth vs breed standard teeth. 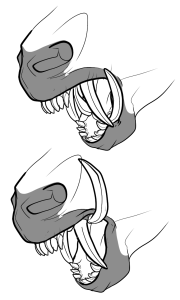 While the flaw does not make life especially difficult, it can be harder to sink the teeth into prey due to the close proximity between the teeth. These Plains Ballators tend to forage for plants and roots over catching prey. Because of their huge sets of teeth, the Plains Ballator has the biggest mouth of all the types and is able to open the mouth wider than any other type as well.

The shoulder manes of either sex are extremely stiff and grow along the scapula, with stallions’ chest manes going past the point of the shoulder, connecting where the neck meets the chest, and covering between the front legs and up to the elbows. The shoulder mane does not stop with the scapula’s curve, like the Mountain ballator, but rather continues and stops at the halfway point of the ribcage. Both stallions and mares have thick, stiff back manes that connect the mane to the tail.

Stallions have short, double-layered manes much like that of a Przewalski horse that stands naturally up along the neck’s crest. The tailbone of the stallion is especially flexible, and they will be seen using their naturally short tails to communicate.

Mares have long manes and tails, unlike stallions, but they are equally as thick. It is thought that mares have less hair because stallions run the herds and use their tails to communicate efficiently.
The coat of the Plains ballator is thick and well-insulated. Often they can have very long feathers on the feet.

Plains’ adult horns and manes will be finished growing at 7 years of age, at which they are considered adults.

The Height of a Plains Ballator ranges from 16 – 20hh.

Herd: Plains Ballators live in relatively small to medium sized herds, ran by a lead stallion and his chosen lead mare. Plains Ballators are unique in that they have the ability and reason to pick the strongest, wisest and usually most beautiful mare to co-run the herd. Thus, the lead mare is strictly loyal to her stallion, not seeking out other mates as some Mountain mares have been seen to do. A stallion will defend his lead mare over the others, and stealing another stallion’s lead mare automatically asserts the thief as the new lead stallion of that herd. When a young male’s large, upward-growing tusk begins to curl at the age of 5, the colt is removed from the herd violently and will usually band up with other bachelor stallions. Typically the young male will remain in the bachelor herd for many years until they steal a mare or claim a herd. The stallions will co-own the herd together until one asserts his dominance and drives the others away.

Feeding: Canines, tusks, hooves as well as horns are used to dig up roots and for foraging. Plains Ballators are not partial to grasses, preferring roots, berries, and wild herbs. However, Plains ballators are almost strictly carnivorous when they are able to be. Usually they go for larger game, as smaller game is hard to catch due to their size. They are not very agile, but they are fast and have a powerful bite force as well as the endurance to chase prey for long periods. Hunting is usually done alone or with one companion, and Ballators will use a combination of stalking, chasing, and bowling over the prey to catch it. Plains Ballators are not very sneaky and prefer to tire out prey rather than spend time strategizing. Once prey is caught, canine teeth are used to puncture the throat, and the superior bite force crushes bones and windpipes. Plains Ballators have been seen to bury carcasses in the snow to store.

Defense: When a Plains Ballator is angered, frightened, challenged, or surprised, it’s shoulder and/or chest manes will stiffen dramatically and puff out, giving the horse a larger appearance. The stallion’s tail will also raise to full height, a gesture known as ‘flagging.’ The Ballator may then do what is known as ‘rattling,’ in which they twitch the manes rapidly to produce a thrumming sound in short bursts. When stallions fight, it is common for this to occur, as well as blood rushing into the nostrils, making them red on the inside in an attempt to scare off the attacker. They use massive shoulders and heads to pummel and push an opponent. Plains Ballators have the highest amount of deaths resulting from fights over mates and territory.

Breeding:  Unlike Mountain Ballators, Plains Ballators do not play nice during the breeding season. Like Mountain Ballators, however, the mare must initiate contact, which is why so often modern, domestic coverings do not occur in Ballator breeders’ worlds. The mare will present herself to the stallion, and the two will show each other their teeth, clacking loudly. During this, the male will often prance, puff his manes, raise his tail, and present his horns. If the female is impressed, she will bite the stallion fiercely, and the two will fight with a ferocity that often could be mistaken for territorial battles. If the stallion impresses the mare, she will allow herself to be bred. Mares are pregnant for 11 months, at which time they give birth to a foal. Horns are small nubs at birth. Plains mares are surprisingly gentle mothers, and foals, especially colts, are prized by the herd.

Arctic Ballators, being the Sub-type of the Plains Ballator, may be bred together; the result is usually a healthy foal which will usually take on the gender differences of the Plains, with the beard and thick coat of the Arctic. Their coats will resemble the coat of a Bakshir Curly horse. However, crosses will not inherit the full, double/downy coat of the Arctic.

When crossed, the foals of Arctic and Plains ballators will usually sport the leggyness of a Plains, combined with a certain hairyness from the arctic, as if they were in a constant winter coat state.

The will not sport the extensive mane of the arctic, nor will they have the double coat.

Thier back and neck manes may blend into the first inch or two of the coat.