Currently, there are nine (9) different types of Equus Ballator. Each of the types has their own unique traits that sets them apart from one another. To learn more about the different types, please click on the links below:

All Equus Ballators possess fangs, shoulder manes, and horns of some kind. These are a staple of the breed standards across all types. Hornless Ballators are a rarity and are as uncommon as their “horn monster” counterparts. Likewise, there is a Bald Mane Mutation which can strip some Ballators of their standard mane. But unless these things are mentioned, an Equus Ballator will always have the staples of the breed, regardless of type.

In addition to these standards that set the breed apart, Ballators have unique physiology and actions displayed by most of the types. They are: 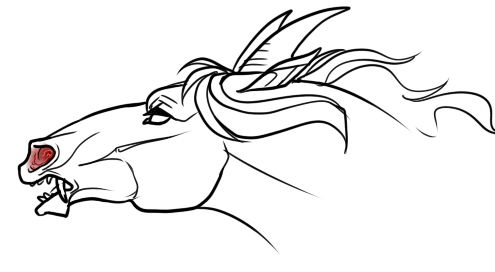 Perhaps the most noticable feature of the Equus Ballator are its horns, which come in a wide range of shape, color, and size. A wild Ballator will often only sport about 4 horns and sets, as this is the most practical for defense and movement. However, domestic Ballators are bred to sport more and more horns than ever before.

Often, horns are in safe locations, but some areas of the horse are unsafe for horn growth. Please click the image to the right for an accurate guide to unsafe horn growth.

The linked guide to the right is for members who wish to “realistically” portray their Ballators. 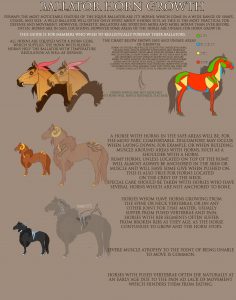 All horns are equipped with a horn core, which supplies the horn with blood. Horns help the Ballator with temperature regulation as well as defense from predators or other Ballators.

On the chart linked above is an image showing safe and unsafe areas of horn growth. Horns in the red area(s) will be fused to the underlying bone, causing pain, muscle atrophy, fused joints, and extremely inhibited movement. Green areas indicate where a Ballator would naturally grow horns. Horns on the neck and rump are anchored in fatty deposits below the skin and are prone to slight movement. Yellow areas indicate places where horns may interfere with muscle growth or movement, leading to pain and atrophy. Blue indicates horns which are anchored by so little material that they often are torn off during simple activities such as grazing or itching. Horns which are not attached to bone will have a rounded, flat base.

A Ballator with horns in the “safe areas” will be, for the most part, comfortable. Discomfort may occur when laying down, for example, or when building muscle around areas with horns– such as a shoulder with a horn.

Rump horns, unless located on top of the rump, will almost always be anchored in the skin or muscle and will have some give when pushed on. This is also true for horns located on the crest of the neck. Special care should be taken with Ballators who have several horns which are not anchored to bone.

Ballators with horns growing from the spine or neck vertebrae, or on any other joint for that matter, usually suffer from fused vertebrae and pain. Ballators with rib segments often suffer from broken ribs as they age. Severe muscle atrophy to the point of being unable to move is common in these “horn monsters.”

Ballators with fused vertebrae often die naturally at an early age due to this pain and lack of movement which hinders them from eating.

The Effects of Overly Large Horns

Thanks to human regulated breeding, Ballator horns have steadily grown larger and more numerous. Originally, Plains Ballators were the only ones which exhibited large horns, because they were the only ones built for carrying such a load. The larger a Ballator’s head horn set(s) get, the thicker the neck must become for raising and lowering such a hefty crown. Ballators, no matter the type, must adapt to their horn sets by doing this, especially if the horns are thick and large.

The skulls of Ballators with large horns also become heftier, with a large dome meant for carrying the horns.

Bone weakness and muscle tearing is common in Ballators with horns in places other than the head.

There are several different Mane Mutations that your Ballator may be born with or that they may gain via The Stat System. The known Mane Mutations are:

Examples of the Mane Mutations and how they may appear on each type are below:

Please bear with us! These small kiddos are newer so their mane mutation examples are incoming as soon as possible!

**Throated Example is Missing! The Admin Team is aware and we are working to fix this issue! Thank you!**

Please bear with us! These graceful kiddos are newer so their mane mutation examples are incoming as soon as possible!

Within the history and canon lore of Equus Ballator, there are two histories you can choose to follow or marry together: Human History and Ballator History.

Though Equus Ballators exist in the human world as we know it, the canon also provides them with a background of rich mythology and lore that makes them much more than horses: it makes them rich characters.

Ballators were once thought to be a “recently discovered” species by humankind. However, new evidence has emerged that they have been in contact with humans for thousands of years. This fact is not only evidences by cave paintings of horned horses, but with relics recently discovered by archaeologists.

It is evidenced that ancient man used the pigments in the horns and hooves of wild Ballators to make paints and dye, and the horns were also used as cups and containers.

Later on, Vikings, Mongols, Celts, and Romans used the horns to crown their helmets and the stiff shoulder manes to line and garnish their clothing; some even garnished their horse’s armor with metal horns to mimic the Ballator’s imposing nature. Kingly robes, long and trailing, had thick, stiff mane hair from stallions often sewn onto the collars.

Ballators of all types were left wild and alone for the most part, with early man initilly too afraid of the predatory equine species to approach. 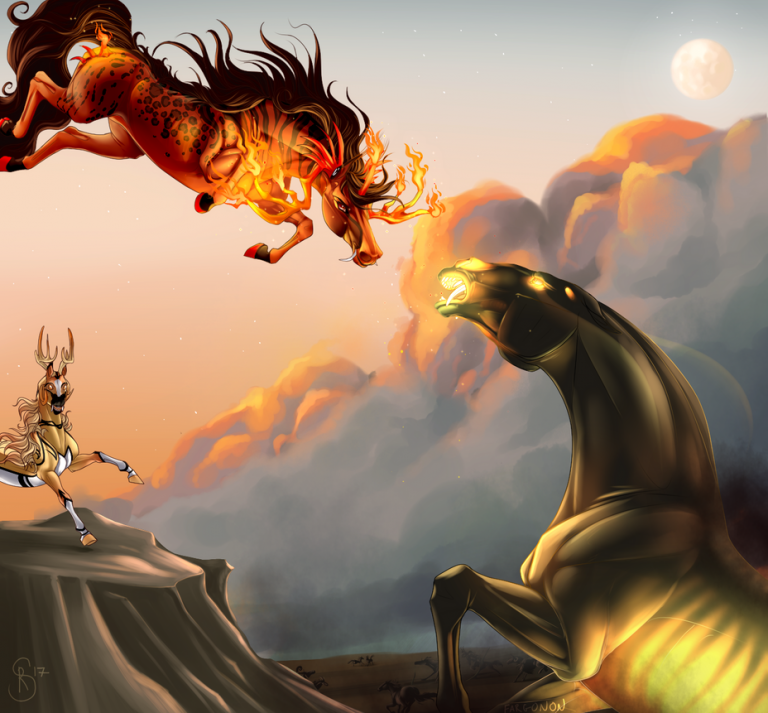 A Lore All Their Own

Equus Ballators have their own creation myths, Gods, and secret locations. Some Ballators ascribe to the beliefs of their mythos and some do not– playing through Mythology and Lore driven prompts are always optional.

The Ancient Romans were the first people known to have successfully domesticated Ballators. Very quickly, the Ballator became a status symbol in Roman society, often being adorned with golden horn and tusk guards.

Too valuable to be used as war horses, they were often confined to a life of luxury, most of them sequestered in Caesar’s courts. These Ballators, once fighting every moment for their freedom, eventually began to grow more accustomed to their surroundings and allowed themselves to be domesticated.

Ballators with the most vibrant and colorful horns were highly prized, especially if their horns came in the noble colors or red or purple. Ballators with duller horn colors were oftentimes the ones sold at markets to a lower social status.

Around this time, other types of Ballators were being discovered and slowly domesticated by different cultures as well. The lithe and agile Desert Ballator, for example, was used in Egypt as the Pharaoh’s war and chariot steeds.

Ballators began to grow in popularity among different cultures. Due to this, more and more middle class citizens came into possession of the strange equines and it wasn’t long before the Romans discovered that the Ballator could act as more than just a beautiful status symbol.

The Colosseum was next in line for the Equus Ballator breed. The mighty, the weak, the aged, and the young Ballators who had sprouted their horns and were deemed “unattractive” were thrown into the pit battles. Oftentimes, the fiercest of them were used in place of lions and other predators in Bestiarii fights.

Borrowing from Egyptian culture, the Romans also began to use Ballators in the Circus Maximus for chariot races.

Though Ballators were now more commonplace and less of a status symbol across the ancient world, they were still considered a fanciful and luxurious breed. This mindset continued on for hundreds of years until the dawn of the Middle Ages.

Ballators had ceased in their domestication with many wild herds being known of, but not readily bothered; the Ancient Roman technique that had been so successful in taming the beasts had long been lost.

In a natural course, as their lands were developed for civilization, wild Ballators began to turn to the easier prey of human tended flocks and herds as easy prey. Like giant wolves, wild Ballators began to attack shepherds, cowherds, and their charges with a seemingly new found ferocity. This led, not only to an economic down turn in these farming industries, but also caused a near superstitious fear of the large equines.

During this time, the Catholic Church was the governing force in many, if not most, countries. The Pope began referring to Ballators as “wolves in sheep’s clothing” and parading them as advocates of the devil; a belief that was further enforced by the predatory nature of The Ballator and the horn and fang adornments standard to the breed.

An empire wide cull was called into effect by The Catholic Church. Wild and Domesticated Ballators were killed off by the hundreds and the few that managed to escape fled to secret lands and herds far from human civilization for safety. Soldiers, knights, and even peasants alike sought out and killed any Ballator that could be found, often starting with the stallions.

The massive cull led to a rapid decline in Ballator population, until almost every single type of Ballator known was considered endangered. As quickly as Ballators had entered the everyday lives of humankind, they had now left, taking with them their precious furs and horns that had once been a symbol of wealth.

An intelligent species, Ballators began associating humans with death and danger and fled deep into the deserts, mountains, forests, plains and valleys. Cut off from humans once again, Ballators existed in remote places for many more years until their rediscovery– though it was initially considered just a “discovery;” due to the Church’s demonic-aligned propaganda, most records of Ballators interacting with medieval and older society were destroyed.

In the late 1980’s, reports began to flood in about the legendary Ballator being sighted in the Rocky Mountains in the Western United States. These claims were ranked along other cryptozoology sightings such as Bigfoot or The Mothman in terms of believably. However, more claims came in and, more out of appeasing the public than anything else, the Utah BLM sent out a team of scouts.

For more than a month, the BLM scouts searched daily for any signs of the mythical Equus Ballator with no luck. They were about to call off the search when one of the scouts’ mares, who was in heat, attracted a large flaxen chestnut overo stallion with bright blue ram horns and a mane encircling his neck. As soon as the Ballator Stallion saw that she was not a Ballator herself, he turned and vanished into the canyon.

After the discovery of the first Ballator, more and more began to be found with small herds of Mountains Plains Ballators being found in that same area. As soon as these initial herds were found, other countries began to search their lands finding Ballator types native to their countries as well. A few scant documents containing some brief mentions about Ballators were found in a tomb near Rome; these discoveries sent Ballators into the modern day equine world and market. Now, once again, Ballators are nearly commonplace. 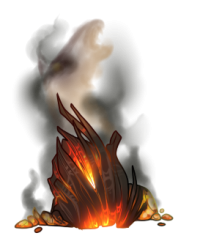