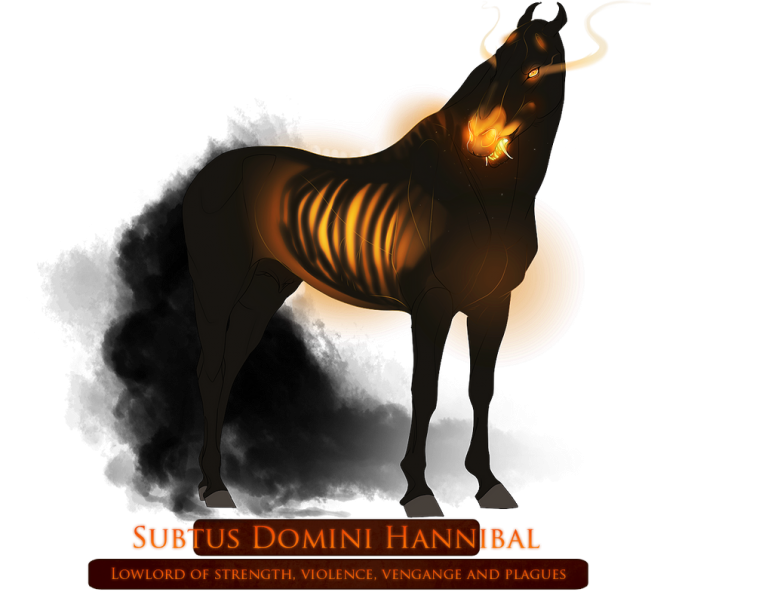 “Come, let me show you what you could be…”

Hannibal is built heavy in the front and light in the back; his middle is treading the line between muscular and thin. A slight roman nose accentuates his hard features. He is completely without manes or tail, which has been replaced by billowing smoke. Firelight illuminates thin skinned areas; he has the ability to snort out sparks. Unlike Ballators gifted with Internum, where it is merely light, actual fire burns in his ribs and heats his body. Grass burns under his feet and the smell of fire and smoke preceeds his appearances.

Hannibal, before his banishment to the Lowrealms, was the treasured son of Aether and Ares. Fiery like his mother, but of good judgement like Aether, Hannibal ruled in the Highrealm alongside Aether and the other Highlords. However, during the Great Seperation, when many of the Highlords fled from the presence of the Highrealm, Aether’s attention turned to focus on his Ballator children, often slighting Hannibal without realizing it. When it was his appointed time to bless the Ballators below with his gift of cunning and skill of hunting, he instead poured out wrath, giving Ballators their angry and dangerous reputation. Aether was furious, but knowing his son was young and angry at his own actions, Aether forgave and saught forgiveness from Hannibal.
Unconvinced, Hannibal wreaked plagues and havoc on the earth, bestowing certain Ballator types with more anger and fury than others. Aether and Ares attempted to rein in thier son to no avail, and at last when Hannibal had resorted to killing and eatng Ballators solely to upset them, Aether cast Hannibal into the lower realms, hoping some time alone in the quiet of the black would subdue him.
It did the opposite.
When Aether calle him back, Hannibal appeared calm, collected and mature. He spoke softly, with wisdom, nodding his hugely crowned head in submission. But this was all a ploy. When Aether once again was comfortable with him, Hannibal attacked with fire and fury, declaring everlasting war on Aether, Ares, and the Ballators they so dearly treasured. As Hannibal set off to attack the earth-bound Ballators, Aether cursed him, and Hannibal’s long, trailing manes fell away from his neck and shoulders, and his beautful orange-and-red crown cracked and fell from his head.
Stripped of his title of Highlord, he was given that of Subtus Domini: Lowlord, and banished forever to the Lower Realms.

However, Hannibal finds his way out from time to time, and those brave enough may visit him. Be warned, his nature is foul, and he has been known to trick even the wisest of horses out of thier horns.

Hannibal – Before the Fall

Every so often, Hannibal comes creeping to the Earth, offering anyone he meets to play his game. He’ll offer you a choice to roll the dice and have a chance at winning a marvelous gift– or a terrible curse.
If you desire to request a curse, your curse will be rolled with another, so you have a chance of getting either.
To enter this devilish game, you must go to the Highlord Meetingplace.  Any curse received by Hannibal is permanent unless you use the Cleansing Elixir. Once your horse loses both manes and horns, it can no longer participate in the raffle.
The raffle is rolled randomly. You have approxamately a 33% chance of getting Common gifts or curses; Rare gifts are harder to obtain. You have a 20% chance of obtaining these.

If your horse loses his mane or horns in the raffle, and has offspring afterward, his hornlessness has a 50% chance of passing on to it’s offspring. If any extra manes (back, elbow, etc) are lost, then your horse will be unable to pass those manes.
Hannibal’s gifts are not genetically passable. 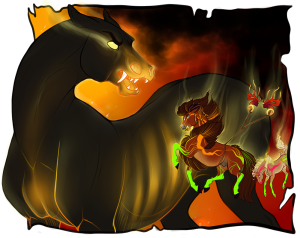 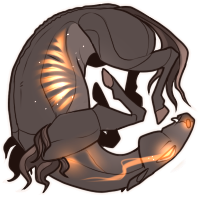 This gift causes the belly to appear to have a light inside it, making the skin around the ribs glow brightly. The eyes and nostrils also emit light. Can be up any color of natural flame.
Photo of natural colored fire for reference.

This gift can be obtained in the Cannibal’s Raffle or by reaching 650 points in the Stat System. 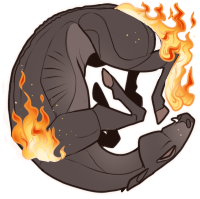 Rare, Gift
Turns your Ballator’s manes and tail into fire that does not burn. Can be any color of natural fire or a mix thereof. When mixed with Fumo Decidens, smoke and fire may co-exist on one Ballator.
Violet or dark purple on the edges of flames like so is allowed.
Photo of natural colored fire for reference.
Accepted Color Variations: Red, Orange, Yellow, White, Light Blue, Medium-Blue, Violet.
Natural flame colors do not include: Pink, green, indigo, dark blue, purple, black.

This gift can be obtained in the Cannibal’s Raffle or by reaching 900 points in the Stat System. 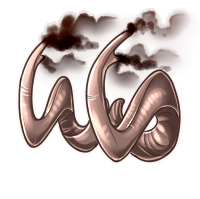 Causes tendrils of smoke to seep from every horn tip, and possibly the hooves.
Coronam Superbia must be the color of natural smoke.

This gift can be obtained in the Cannibal’s Raffle or by reaching 200 points in the Stat System. 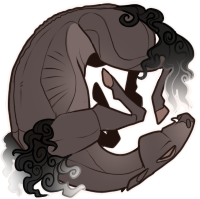 Fumo Decidens
the Fading Smoke
Common, Gift
The gift turns all the manes into smoke. The hair fades near the tips, like smoke in the wind.
Fumo must be the color of natural smoke.

This gift can be obtained in the Cannibal’s Raffle or by reaching 200 points in the Stat System. 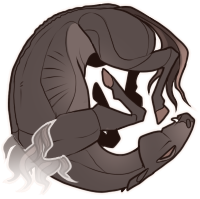 Domine in Ignominiam
The Underlord’s Shame
Common, Curse
Removes Manes
A curse given to those who lose in the Cannibal’s Raffle; all the Ballator-specific manes fall out, and occasionally the neck mane, leaving only the tail.

Manes will only regrow with the help of the Cleansing Elixir. 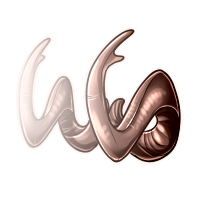 Exutus Coronam
Stripped of Your Crown
Common, Curse
Removes Horns
This curse is given to those who lose in the Cannibal’s Raffle; all the horns fall off and never regrow without the help of the Elixir.

Horns will only regrow with the help of the Cleansing Elixir. 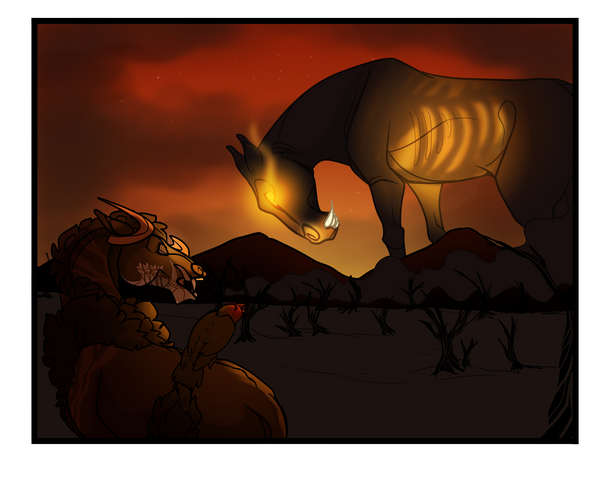