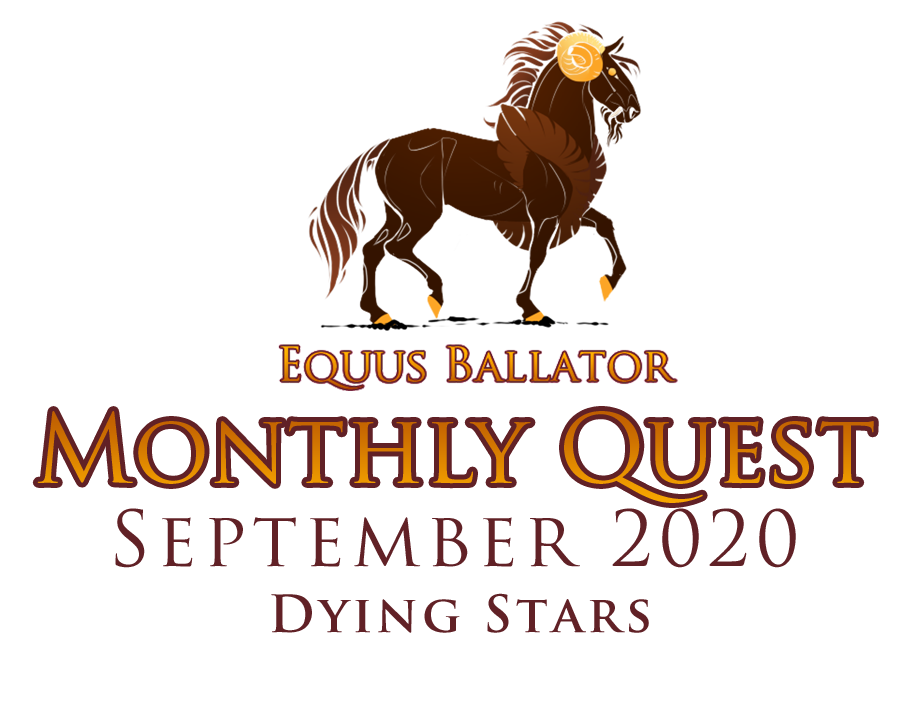 Blood painted the statues and gateway stones to The Crypts; blood both from Ares’ Hunters and from Antares’ star touched army. It trickled and pooled around the hooves of the old Highlord statues, slipping into unseen cracks beneath them. The Red Star pulsed again and as a unit, Antares and his army pushed forward even more.

Below the sand and muck, deep in the crypts, old bones stirred. Puck, eyes wild, watched as the corpses closest to him shuddered to life.

“Regale,” he breathed, “Get up!” But the figure next to him didn’t stir. Puck’s face was reflected in the pulsating glow of Regale’s star touched growths. The crystals climbed all over the stallion’s curling blue horns, clustering thickest at the base. Puck whispered a barely audible apology before rearing in panic, and bringing golden hooves down on the largest, brightest growth that was consuming his friend.

Over the pained cries below them and around them, Ares’ Hunters, exhausted from fighting through a sea of enemies that felt no pain were being pushed further and further back. Any of their companions that fell simply rose again to join the fight for Antares. The troubadour’s harsh laughter carried over the den of battle as he relished in the destruction. Triumphantly, he ripped the Solar Crown off of the warrior closest to him, tossing it aside as his ghouls swarmed over its former bearer.

Antares flicked an ear, annoyed as the ground ruptured at his feet and his sister emerged, snapping at his ankles. He cast a rueful glance at the star above him in the sky before regarding the mare cooly,

“How nice of you to join me, sister,” Antares lunged at a stallion who had come too close while the troubadour was distracted, driving it back into the open jaws of his army, “Better late than never, I suppose.”

“Antares,” she greeted with a sneer,shaking blood and dirt from her coat, “How nice of you to offer this distraction. But I have real work to do… you were always such a layabout and that is why The Masters woke me up so soon.”

Feathers: Betelgeuse looked up towards the sky, her glowing red eye flashing in time to The Red Star. She spit on the ground, annoyed at whatever command she was given and bunched her hindquarters. She leaped, large black feathered wings springing from her shoulders and carrying her a short distance. With the same speed as they had appeared, they seemed to wither and die, the feathers falling out and withering to ash, the skin and muscles pulling away and the bones crumbling. Where she landed, the last bit of the oasis’ greenery around her hooves rapidly bloomed and died as well.

“Have fun playing general, brother,” she called over the den of battle, “There’s a little birdy that needs my attention.”

Betelgeuse prepared for another leap, unaware or uncaring of the eyes upon her. With another flash of star touched wings, she rose out of the oasis and disappeared into the clouds. A star touched ghoul was pushed into the dead spot left in Betelgeuse’s wake, the growths on its skull cracking and falling off and its bones turning to ash as it fell…

– Draw or Write your Ballator’s reaction to the ghoul’s untouching. Depicting Betelgeuse will grant your Ballator 1x Penitent Sacrifice.

– There is a 7 stat minimum for this prompt.

Heartfelt: Star’s sides are heaving as she trots along the deadlands of The Charred Plains. Though the effort of the journey seems taxing, the mare seems content enough; she’s not one to complain.

“I do wonder if Hannibal will even listen to me!”

Her voice is curious, but somehow higher– the only clue to her own nerves. The mare slows her pace as she and your Ballator draw up alongside what was once a dried creek bed. Lava is slowly claiming it, the edges of it hardening in the cooler air. Star studies the lava for a moment before speaking again.

“We’re closer to his home. There should be lots of ghouls here… it’s interesting that we haven’t seen a single one, isn’t it?”

Star and your Ballator walk a little further, the heat of the lava singing their fur. As they travel, the lava becomes more prolific, the bones of great beasts join those of Ballators and other smaller animals. Star doesn’t stop to study them, though. She sidesteps a noxious geyser with ease, but pauses, confused.

Before the travellers, where there should only be cliffs and stones and fire, is a massive tangle of dark roots and branches: The Deadwoods.

– Draw or Write your Ballator and Star on the edge of The Deadwoods.

– There is a 7 stat minimum for this prompt. Star must be depicted.

– Prompts must be separate entries.
– Prompts must still be submitted to the DeviantART Group.
– Prompts will not count for Regale’s Quests or Wild Ballator entries.
– Anthros are not allowed for these prompts.
– Prompts for this month can be completed as many times as desired, but you will only gain prizes for the first attempt.
– Stat grids will not be accepted as entries. Comics will accepted as entries so long as only one prompt is depicted per comic, only horses relevant to the prompt are shown, and the stats do not exceed 20. (Reminder: Companion bonuses will not apply to comics as they are counted by stat grid guidelines!)
– Entries must contain the Ballators pictured and the prompt completed in this format:
Horse(s) Pictured: (Link to Refs)
Prompt(s) Shown: (Please link back to the Monthly Quest Page & Specify Prompt)
Stat Breakdown:
–
–
Stat Total: